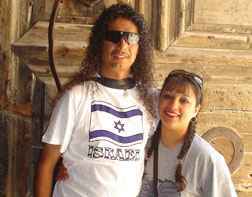 Jose & Amy Muniz are the Founders of JesusCrew Street Ministries and have been together for 40 years. They met in 1981 at a Drive-In Theatre. Jose was selling marijuana to several teens and one of those teens was Amy. They started dating and then moved in together and lived together for 5 years before they got legally married. They lived a life of partying, drugs and alcohol. After Jose had a couple of overdoses and getting arrested on drug trafficking charges, God stepped into Jose's life and two months later God touched Amy's life as well. Soon after that God moved them to Abilene, Texas as missionaries and they started going out to the local night clubs, malls, parks, street corners. They have been going out every weekend for over 38 years.

To learn more about this ministry